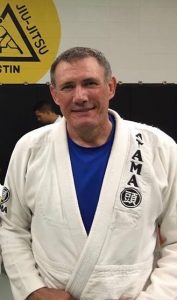 Mark was born in the Northeast where he grew up riding dirt bikes and target shooting with his father and brother. In the early 90s, just after the first UFC, he became one of Pedro Valente’s first Jiu Jitsu students in Miami, FL. He was then accepted into the Instructor Training Program in Los Angeles, CA with Royce Gracie and received his Black Belt from him in 2005. He became a professional instructor at the Torrance Gracie Academy and taught hundreds of students including law enforcement and military personnel. This led him to a career working in design and sales for large USA manufacturers of law enforcement and military equipment. He continues to teach as a hobby and occasionally teaches seminars with Royce Gracie.  Mark is an avid outdoorsman, and accomplished shooter and currently resides in San Antonio, TX with his wife and son.